If you're looking for Elden Ring merchandise, you don't have to travel across ‘The Lands Between’ completing quests. There are already a lot of great gifts for Elden Ring fans out there, so you're sure to find something you like.

Elden Ring is the latest hard-as-nails game from Hidetaka Miyazaki, the man behind the Dark Souls and Bloodborne series. The game is set in a fantasy world where three realms are colliding and it's filled with a plethora of weapons, armor, and items for the players to collect.

While most of these items can be crafted or obtained by completing quests, others can't, which is why you’ll have to travel to a new realm, the land of online shopping. Fear not brave tarnished one, we've compiled a list of the best Elden Ring merchandise, from different keepsake starting items, to Pot Boy, Valkyrie Helmet, plushies and branded items.

As we look to update this list every day, here is a list of the best Elden Ring merchandise & gifts for the Tarnished that are currently on the market. 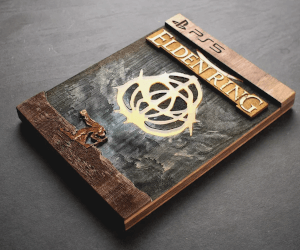 Proudly display your love for Elden Ring with this custom wooden Elden Ring game case. The game case is handcrafted from walnut, cherry, and poplar with engraving and detailing on both sides. The case is fully functioning. 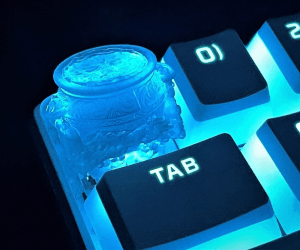 Summon your ally, the Iron Fist Alexander to help you in your quest with this Elden Ring Pot Boy keycap. The 3D printed keycap is intricately designed and translucent. It's designed for Cherry MX mechanical keyboards. Display your love for the Lands Between with this deluxe Elden Ring 3D light box. The 3D light box features blue and yellow LED's behind the eight visual layers to create a beautiful glow, perfect for fans of the Elden Ring game. 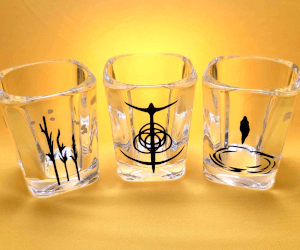 Drown the pain of losing yet again to the Goddess of Rot with the Elden Ring Shot Glasses. These shot glasses will hold the perfect pick-me-up when you are tired of getting wrecked by that same boss for hours on end. 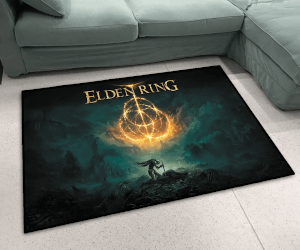 Decorate your gaming room or mancave with these Elden Ring rugs. The rugs come in a range of sizes to suit any room and there is a total of 8 different designs to choose from. The rug also features an anti slip backing. 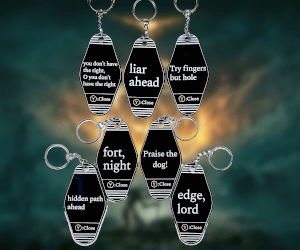 Be prepared for the dangers that lurk around every corner of the Lands Between with these Elden Ring message keychains. The acrylic keychains contain popular messages left in game by the community to guide other players. 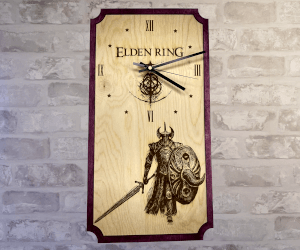 Bring a taste of Stormhill Evergaol to your home with the Elden Ring Crucible Knight Clock. This engraved wooden clock features the first Evergaol boss and arguably the most frustrating field boss you'll encounter, the Crucible Knight. 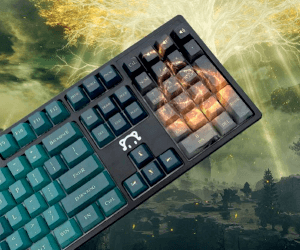 Cover your keyboard with a tribute to your fellow Tarnished, with the Elden Ring Keycaps. Each piece is hand-designed and made out of PBT plastic. The perfect gift for any fan starting their journey through The Lands Between. 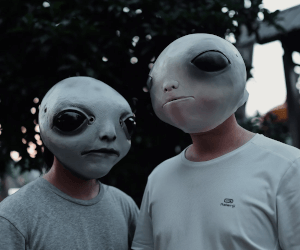 They say the Albinaurics are made by human hands, just like this handmade Elden Ring Albinauric mask. The mask is made from latex and will raise arcane, but sadly reduces the HP recovery effects of the Flask of Crimson Tears. 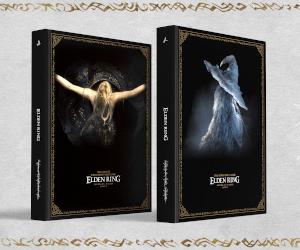 Gather all the knowledge you need to take on this notoriously difficult game with the Elden Ring strategy guides. These official guides will prepare you for everything the game has to throw at you and reveal all the secrets.

Enhance your journey through various regions of the Lands Between with the Elden Ring RGB Mouse Pad. The super-soft LED-lit mouse pad is extremely easy to set up, waterproof, powered by a USB, with no driver required. 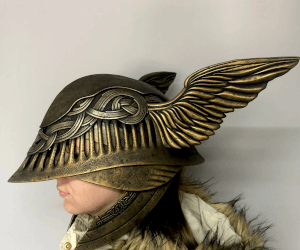 The Elden Ring Valkyrie helmet is the perfect accessory for any fan's journey through The Lands Between. Brandish the iconic winged helmet of Malenia, Blade of Miquella, which is forged from solid biodegradable PLA plastic. 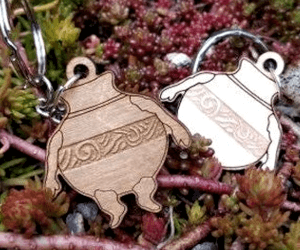 Raise the potency of your homemade concoctions with the Elden Ring Companion Jar keychain. The wooden keychain talismans are made from 4mm thick plywood with laser engraving. The keychains come in either plain or stained. 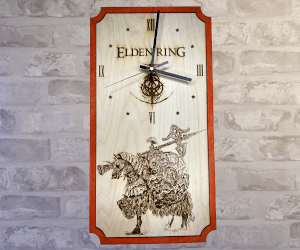 Bring an element of Limgrave to your room with the Elden Ring Tree Sentinel Clock. The clock is made of baltic birch plywood and features the heavily armored Tree Sentinel, one of the first bosses you encounter in the game. 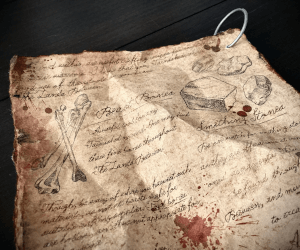 Unlock new tarnished crafting recipes from the Lands Between with the Elden Ring Cookbook. The distressed, stained paper stack is a display prop replica, inspired by the category of items used to craft ammunition and consumables. 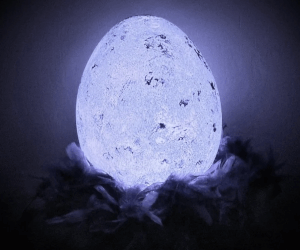 Light your way across the lands between with this elden ring slumbering egg lamp. The hand painted lamp comes with a nest made with real bird feathers. It has multiple color and brightness settings to match your setup. 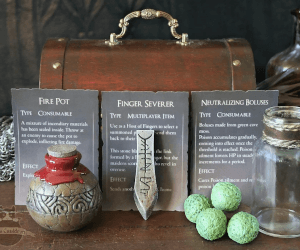 Reclaim your precious stored inventory items with this Elden ring item chest. Similar to chests at the sites of lost grace, this chest contains 3 items for you to display, a fire pot, a finger severer and neutralizing boluses. 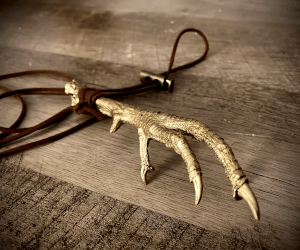 Modeled after the Gold Pickled Fowl Foot consumable item from Elden Ring, this real chicken foot has been dried, preserved, and painted gold. The rune charm is certain to boost your rune acquisition during your travels. 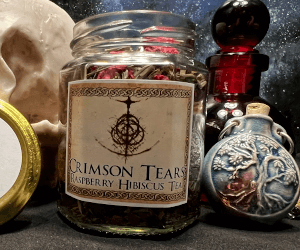 Restore some much needed HP with this Elden Ring crimson tears tea. The raspberry hibiscus tea comes with disposable tea bags for each cup. You can increase it's potency by finding a sacred tear, or by steeping the tea for longer. 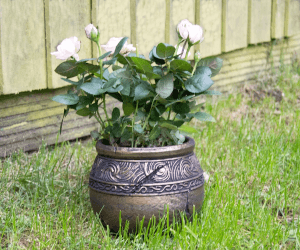 Add some character to any room or garden with this Elden Ring Pot Boy plant pot. This 3D printed plant pot is made to resemble Alexander the Iron Fist. If the pot gets stuck in the ground, just give it a good smack from the rear. 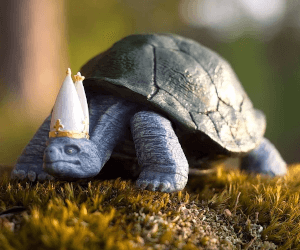 Pay homage to everyone's favorite dog in the Lands Between with this Turtle Pope figurine. The figurine is 3D printed and available in 3 sizes. This adorable Miriel, Pastor of vows is an excellent addition to any gamer's collection. 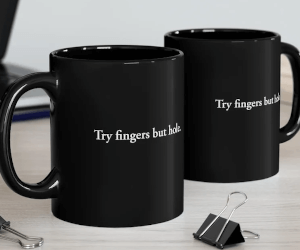 Leaving helpful or funny messages for other tarnished or office colleagues is always appreciated. This hilarious Elden Ring try fingers mug is guaranteed to make people laugh and occasionally restore your health when used. 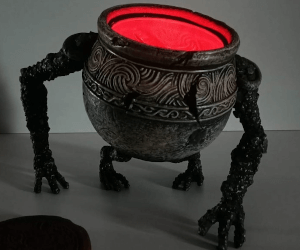 Keep a trusty companion by your side while you game with this Elden Ring Pot Boy figure. This noble living jar known as Iron Fist Alexander is 3D printed with intricate detailing. It has a removable lid and LED lights. 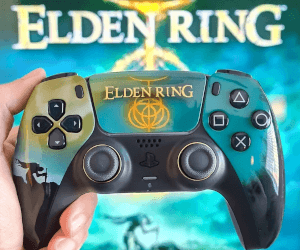 Fully immerse yourself in the lore of this gem by FromSoftware with this custom Elden Ring PS5 controller. The PlayStation 5 controller is airbrushed and has a glossy finish with personalization options available. 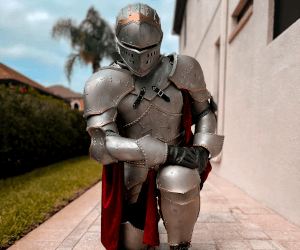 Build a reputation as the most feared knight in the Lands Between, with this Elden Ring medieval knight costume. The suit is made up of 30 distinct snap-on sections that are completely functional and designed for maximum mobility.

As a fan of the Elden Ring, you probably already have some favorite weapons, collectibles, and items from the game and we've got some of the best merchandise to reflect them.

The items listed above are just a few of the many items you'll find in Elden Ring. We at Blow My Budget have been fans of the Souls series since the first game was released in 2011. Therefore, we plan to scour the internet every day, looking for the newest merch as the game and community grow.

A great way to show your love for the game is to flaunt this awesome merchandise and share it with fellow gamers and Elden Ring enthusiasts. These items are a must-have for any player that wants to get their hands on a little Elden Ring swag.